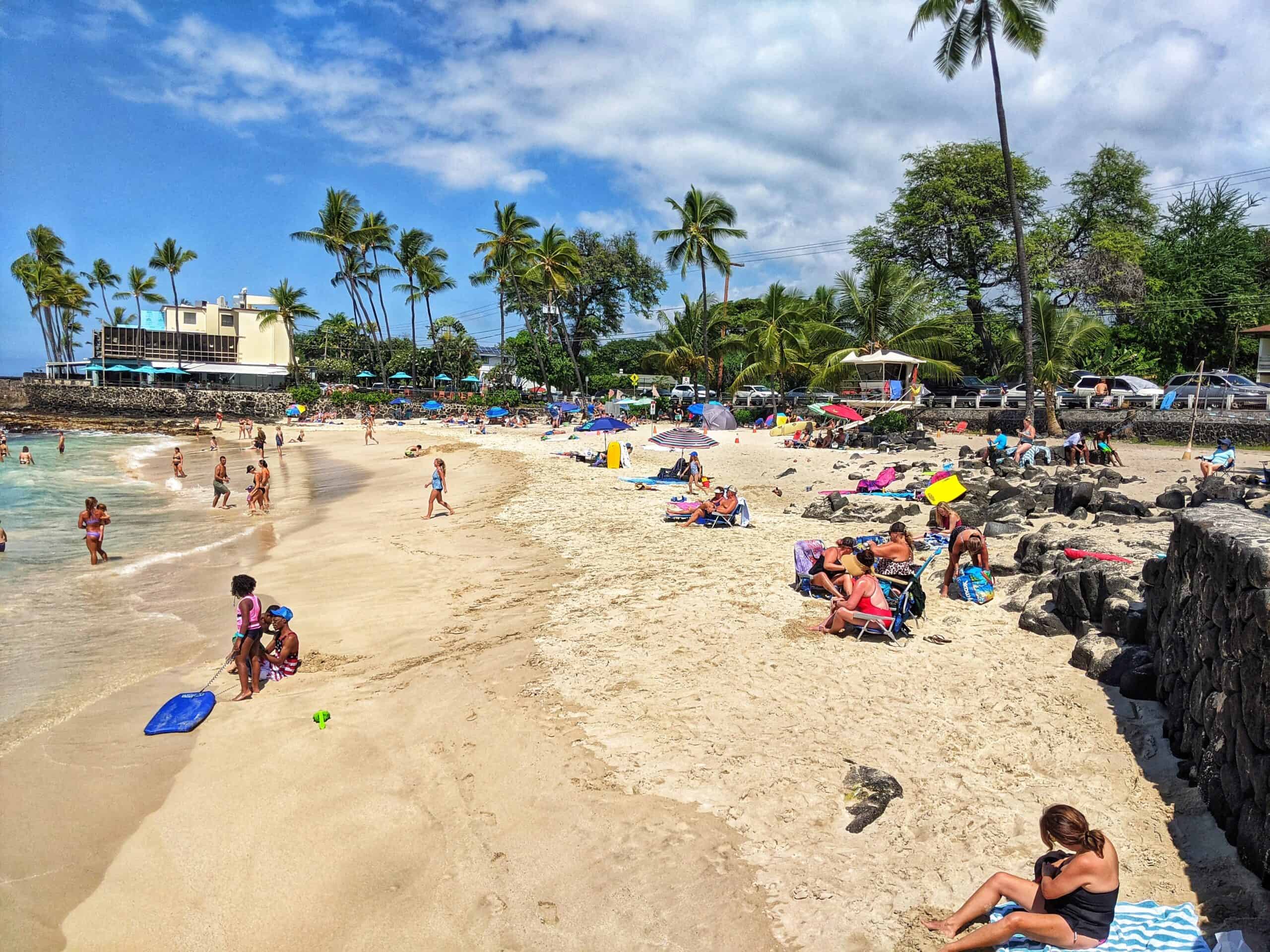 John C. Derrick for Hawaii Guide on the 10 best beaches on the Big Island.  Join us on the Hoku Nui to get out on the crystal blue waters of the Kona Coast and mingle with the sea life and a great crew.

Which beaches are the very best on the Big Island? Which are worth a visit and which can be skipped? Our ratings consider several vital things; sand quality, waves, year-round consistency, crowds and popularity, accessibility, and the beaches’ surroundings. Let’s look at the Big Island of Hawaii’s best beaches.

#1 Rated Beach on the Big Island

Like anything worthwhile, Makalawena, or Mak, Beach makes you work a little bit to enjoy it. It takes about a 20-minute walk across the lava to the beach, but don’t worry, the path is well worn through the a’a flow.

This secluded white sand beach is a crescent broken up by rocky lumps of lava. Palms and other trees rim the dunes near the northern end, where you are greeted with picnic tables and some wild chickens.

It’s not likely that you will run into many people here, and thus you’ll likely be able to enjoy the most scenic beach on the island in solitude.

#2 Rated Beach on the Big Island

This is a top-rated beach for both locals and visitors. Conde Nast Traveler magazine has often ranked it as one of the top beaches in the US. It is hard to argue with this half-mile stretch of pristine golden sand and crystal blue water.

Several covered pavilions to enjoy an afternoon picnic and restrooms, albeit rather pitiful ones, are available. Occasionally, there is a lifeguard on duty despite the “no lifeguard on duty” sign.

Don’t expect a lot of shade on this beach. Consequently, the golden sand heats to an unbearable temperature on a sunny day. The sand reaches 200 feet wide during the summer months, so unless you want steaming toes, wear sandals or water shoes. In the summer, the water remains generally calm, but the surf rises to dangerous levels in the winter. Make sure to monitor conditions carefully before entering. For snorkelers, the south end of the beach provides a variety of fish and coral.

#3 Rated Beach on the Big Island

Kua Bay, also called Manini’owali Beach, sprawls across a lovely little pocket of sand. Once difficult to access, the government recently spent a million-dollar to pave a good road through the lava- it’s a snap to enjoy this Big Island gem.

Kua Bay beach has full facilities, including restrooms and showers, water, barbecues, and picnic tables. It is trendy on the weekends, not to mention parking can be a nightmare, so you might want to aim for the weekdays.

When the water is calm, swimming is great here – some of the best in Kona. However, if the waves are going, stay out because it can be perilous.

#4 Rated Beach on the Big Island

Samuel M. Spencer Beach Park’s reef-protected waters offer child-friendly swimming and a relaxing atmosphere. There are plenty of amenities at this beach, including a lifeguard, picnic tables, and barbecue. Camping is allowed with a permit.

From the south end of the beach, you could follow a coastline trail, Ala Kahakai, to Hapuna Beach. An ambitious project currently under the jurisdiction of the National Parks Service, Ala Kahakai, theoretically will be a coastal trail running 175 miles from Upolu Point in North Kohala to the eastern boundary of Hawaii Volcanoes National Park.

#5 Rated Beach on the Big Island

Known as Green Sand Beach or even Pu’u o Mahana, Papakolea Beach is well-deserving of its name. The olive-like color of the sand comes from the presence of a greenish, semi-precious stone named, appropriately enough, olivine.

The erosive force of the ocean washing into the base of the Pu’u o Mahana cinder cone has extracted olivines out of the cinder. These are deposited on the sand, giving the sand a green tint.

This beach is challenging to reach but wins points as our #5 beach-based purely on its uniqueness. I mean, really, where else can you visit Green Sand Beach?

#6 Rated Beach on the Big Island

Kona Coast or Kekaha Kai State Park is 1,600 acres of beautiful sand and pristine blue waters. Several beaches in the park are accessed via a 1.5-mile road located between the 91 and 90-mile markers on Highway 19 north of Kona.

Once you reach the first parking area, you can take the path to your right and north to Mahai’ula Bay, a lovely crescent of white sand and clear waters. Enjoy this trendy beach for itss nice warm spots to sunbathe.

#7 Rated Beach on the Big Island

Punaluu- the most easily accessible black sand beach on the island- is a little gem just off Highway 11 near mile marker 55. The thick, coarse grains of black volcanic sand, created by the crashing of waves against lava, encrust the waters of this bay.

Graceful coconut palms enclose the beach, creating a rich strip of beach irresistible to sunbathers of the human and turtle variety.

You are likely to see green sea turtles (honu) lounging on the warm sands or floating in the tiny crevices near the shore during your visit.

#8 Rated Beach on the Big Island

The soft white sand beach is one of the loveliest you’ll ever see, it’s relatively uncrowded, and on a clear day, you can spot the impressive Mauna Kea volcano. Best of all, it’s conveniently located directly in front of the luxurious Mauna Kea Beach Hotel, complete with perfectly-manicured grounds.

The calm azure waters sparkle by day and twinkle magically at sunset.

#9 Rated Beach on the Big Island

Pololu Valley Beach will take a short hike to access the beach, so prepare for a bit of adventure. This black sand beach separates the beautiful Pololu Valley from the ocean, is a lovely stretch of fine black sand rimmed with black lava rock and shockingly emerald green beach ground cover.

Awini Trail leads down to the black sand beach takes approximately half an hour to hike. The dirt and root trail can be steep in places, but the various views of the valley along the way make even part of the walk worth it. You will find the trailhead near the parking lot.

#10 Rated Beach on the Big Island

Just about a mile down the road from Ahalanui at the junction of Highway 137 and Pohoiki Road in Puna is one of the most popular beaches in the area.

Due to the most recent lava flow of Kilauea in 2018, a volcano eruption formed the *new* Pohoiki Black Sand Beach (the area in front of the Pohoiki boat launch, to be exact). This beach park was highly fortunate to have survived the lava flow activity.

Eruption almost filled Pohoiki Bay with lava, but the flow stopped just 230 ft. from the harbor.