HOW DO MANTA RAYS REPRODUCE? 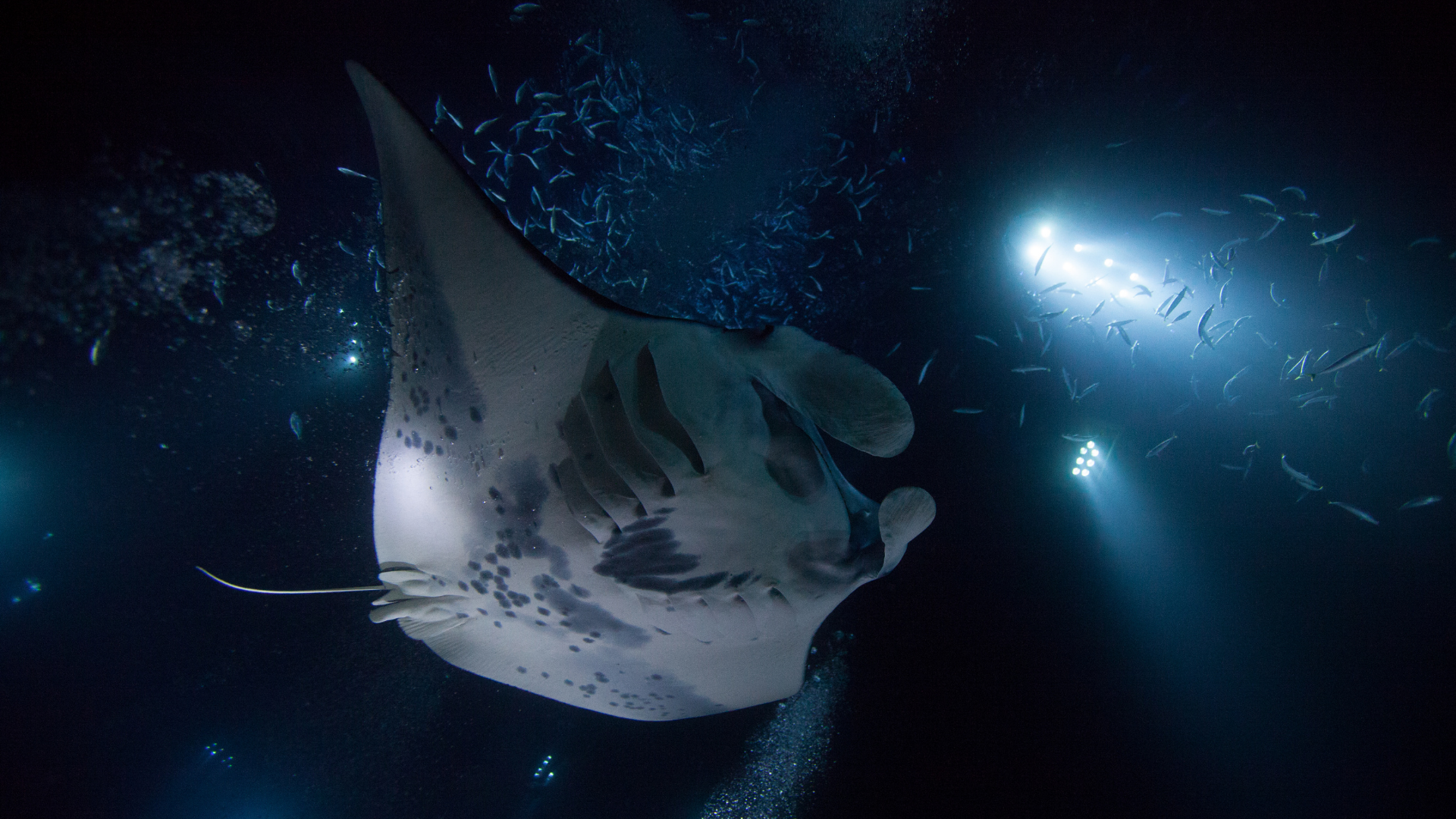 Martina Wing for Manta Ray Advocates on manta ray reproduction.  Join us on one of our manta ray tours to experience these majestic creatures firsthand.

THE MANTA RAY MATING PROCESS: HOW DO MANTAS COURT WITH EACH OTHER?

The start of the mating ritual is fittingly called ‘manta train’. One female manta ray swims up front, followed by several male mantas. The largest manta train we have witnessed included 20 male mantas, both young and old, chasing the female.

Sometimes the same female will be chased for several weeks at the time. However, as courtship advances, most males will abandon the train. This seemingly leaves only one male left to succeed and impregnate the female manta ray. We always assumed that “the last man standing” would be the one to inseminate the female, but we’ve seen females being chased by single males after that (and even pregnant females being the target of manta trains).

For instance, in the video below (scroll down!) we see Big Bertha being closely followed by Miles Ray, so we thought he was The One for her. However, later on, when we checked out the footage, we found out that Lightning Ray pursued her (on his own) as well. It’s not clear who fathered the child in the end, that could only be proven through DNA testing.

There is no definitive research to suggest manta rays follow a specific method when deciding on a partner.

AT WHAT AGE ARE MANTA RAYS FERTILE?

Not much is known about manta rays’ fertility rate and the age at which they’re ready to have pups, although we assume they will become available for mating after they’ve reached maturity.

That one sighting gave us a glimpse into how old they can be when they carry pups – and that’s what made it most exciting.

HOW DO MANTA RAYS REPRODUCE?

As the manta train begins, many male mantas will chase the female who has proven to be rampant and exciting to witness.

When a male is ready to impregnate the female, he will follow her closely and wait for the female to be ready.

When a female manta ray is ready to mate, she emits a species-specific concentration of chemicals called pheromones, which trail along behind her as she swims. The males can detect these chemicals in very small concentrations. This alerts them that she is ready and gives them a way to find her by following the scent.

When attempting to mate, the male swims above the female and holds her wingtips to stop her from moving. He’ll then insert one of his claspers into her cloaca to achieve egg fertilization. The claspers are extensions of the pelvic fins and are the means by which the male manta ray delivers sperm to the female. The male has two claspers, but only one is used when fertilization is attempted.

Prior to transmission of sperm, a gland is activated at the base of the claspers, which secretes a thick fluid, which contains proteins and lipids. Not much is known about this fluid or its purpose, but scientists theorize that it may have something to do with lubrication of the clasper groove; perhaps to prevent loss of sperm during copulation.

The first signs of a manta ray pregnancy are very similar to human pregnancy, beginning with an enlarged belly.

However, unlike humans, manta rays don’t have placentas or umbilical cords. According to this article in Live Science, baby mantas are able to breathe rhythmically while in utero.

During Big Bertha’s pregnancy diary, you can see a small bump emerging between the back and the pelvic fins. This area of a manta ray is usually completely flat, so you can immediately tell when a female begins ‘showing’.

As you probably already know, there are two types of manta rays: the pelagic and reef manta.

To this date, a pelagic manta ray birth has never been recorded in the wild – consequently, most of the information in this article is about reef mantas.

Manta rays are “ovoviviparous”, meaning the young hatch from an egg inside the mother and the mother gives birth to a live well-developed pup. The young are almost exact replicas of the adult form; just smaller. Females produce only one pup at a time.

This Science Mag article features pictures from inside the manta rays womb. They use an ultrasound machine to track the baby mantas’ developments.

The entire duration of a manta ray pregnancy lasts around 13 months. As the baby manta grows inside the mother, it is protectively wrapped inside its wings in a ‘burrito’ style.

HOW DO MANTA RAYS GIVE BIRTH?

I’ve written about how manta rays give birth before – read more in this article. It includes the only images on record showing the birth of a manta ray pup in its natural habitat.

The baby manta stays wrapped in the burrito shape during its birth. Seconds later, you can see the wings unfurl as the manta pup twirls into life, swimming and gliding through the ocean.

ALL ABOUT MANTA RAY BABIES

WHAT’S THE SIZE OF A BABY MANTA RAY?

Here at Manta Ray Advocates along the coast of Kona, Hawaii, we have been lucky enough to identify at least 10 – 15 manta pups over the years. When birthed, manta pups unfurl out of the wrapped-up-burrito shape into a 2-3 feet wingspan. The most memorable pup I’ve encountered was Capt. Kirk as he must have been only a few days old when he was first sighted in 2005. He was identified at Manta Village and was very shy and stayed in the dive site’s dark outskirts.

Pelagic mantas create larger manta babies, with a wingspan of around six feet. We have gained this insight from a video birth shot in an aquarium in Okinawa, Japan.

HOW DO WE KNOW WHO THE FATHER OF THE MANTA RAY PUP IS?

When a manta pup is born, it isn’t easy to distinguish who the father is. Interestingly, there are no shared features between father and pup. In the future, we are looking to test some DNA samples on the Kona coast of Hawaii in order to determine paternity.

BABY MANTA RAYS AND THEIR MOTHER

Some theorize that female mantas and their manta pups share similar markings. This appears to be true in the case of Nick Ray and Vinny Ray, both sharing Big Bertha’s distinctive ‘V’ shape along their white underside.

Additionally, unlike mammals, there is no lasting connection between the manta pup and the mother. The young manta rays are on their own from the beginning.

There are two main reasons for this: