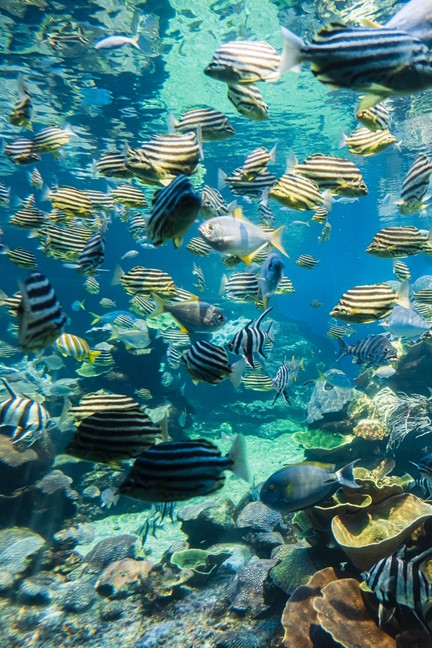 We list our 3 favorite snorkeling spots on the Big Island to help you make the best of your time in Hawaiʻi. We think that if you put on your snorkeling gear and start swimming around the Big Island, you [a] will never get bored, but [b] will be busy for a long, long time.

Because you probably don’t have enough time to explore all snorkeling spots on the Big Island we list the 3 best spots (based on their abundance of marine life and easy accessibility), below.

An unremarkable beach park close to Kona hides one of the best places to snorkel on the Big Island.

The easily accessible, sheltered, and shallow bay is home to one of the highest concentrations of fishes on Hawaii.  At low tide there are plenty of tide pools to explore that are teeming with tropical fish. Kahaluʻu Bay is a great place for people that are new to snorkeling.

Kahaluʻu Beach is also famous for its Honu (green sea turtles). On any given day you’ll be able to see quite a few of them feeding on seaweed and sunning themselves on the warm rocks.

Good to keep in mind: there are many surfers at this beach. Make sure to stay on the south (left when looking towards the ocean) side of the beach while snorkeling.

Its proximity to Kona makes this beach park an ideal place for a last-minute snorkel. Getting there and back from downtown Kona plus an hour of leisure snorkeling will only take about two hours!

Kealakekua bay is an underwater marine sanctuary where you can find many colorful exotic fish and often also dolphins and sea turtles.  To get here you have to drive approximately 13 miles south from Kona along Highway 11 and then follow the Nāpōʻopoʻo Road to the end.

The bay is also know as “Captain Cook”, after a 27-foot tall monument commemorating the death of the British explorer Captain Cook at this bay on February 14th, 1779.

The center of the bay is deep and you can often find a pod of spinner dolphins playing around here. There are plenty of good spots for snorkeling in the bay, but the best snorkeling spot is on the opposite side of the bay from the parking area, close to the captain Cook monument.

The famous snorkeling spot at Honaunau bay is called Paeʻa, and is also know as “Two Step”.

Honaunau Bay is often referred to as the “City of Refuge”, after the Puʻuhonua o Hōnaunau National Historic Park (also know as – you guessed it – the City of Refuge). The Travel Channel named Honaunau Bay one of “America’s Best Beaches 2004”. A big reason for this is that due to a very advantageous layout of the bay, the water is almost always calm and the waters have exceptional visibility most of the year.

This spot is often rated the second best place on the Big Island for snorkeling after Captain Cook. The waters are usually clear and the average depth is about 20ft. Often you can see pods of dolphins swimming close to shore. There is a very easy place to enter the water called Paeʻa or “Two Step”. It is at the end of a finger of lava and easy to find because you will see lots of people getting in and out of the water.